On Thursday 10 January, the Leeds-Morecambe Community Rail Partnership formally marked the local involvement of both Arriva Rail North (Northern) and Carlisle Support Services for their part in promoting dementia awareness on the Bentham Line. 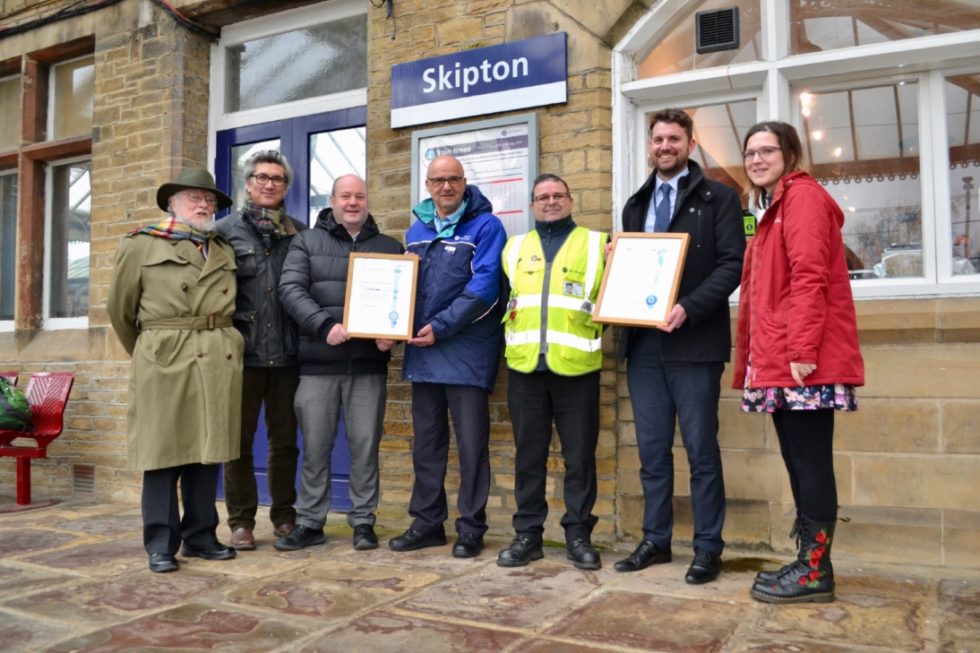 Over the last six months Gerald Townson, CRP chairman, Rod Tickner, vice chair and Catherine Huddleston, the Bentham Line partnership officer, have been delivering sessions for staff to raise awareness of dementia and also enrol attendees as dementia friends.  All three are Dementia Friends Champions, an initiative of the Alzheimer’s Society, which aims to give a positive approach that enables those with a dementia diagnosis to live well.

Gerald Townson, presented framed certificates to John Kitching, the Northern station manager in charge of ticket office staff at Shipley, Bingley, Keighley and Skipton stations and also Paul Kemp from Carlisle Support Services who provide gate-line and revenue-protection staff at the same stations.  The certificates will be displayed in the work offices to reflect their staff’s keenness to be actively involved.

Gerald said,  “I am pleased to mark the positive involvement shown by both companies in allowing these vital front-line staff to attend the two-hour awareness raising sessions.  Almost 50 of the staff have attended and with volunteers and other groups, such as British Transport Police, the overall number to attend the sessions is near 200.”

Ian Davis of the Association of Community Rail Partnerships said,  “This is a wonderful collaboration between the Bentham Line CRP, Carlisle Support Services and Northern.  ACoRP is delighted to support this major project which creates an increased awareness of dementia and promotes inclusivity on the railway and in the communities on the route. I am looking forward to this extremely important initiative to expanding beyond the Bentham Line.”