Community Rail Lancashire is pleased to announce that Arriva Rail North has successfully recruited both Regional Community & Sustainability Managers (RCSM) for our areas and they are both now in post.

Martin Keating has been appointed internally and is RCSM for the West Region, which covers CRL’s lines in West Lancashire, the Fylde Coast and to Mill Hill on the East Lancashire Line.

Vicky Cropper has moved from Great Western Railway to take up the Central Region post, which covers the rest of CRL’s Lancashire routes including Blackburn to Colne, Clitheroe to Manchester and the new Blackburn to Manchester/Wigan service via the Todmorden Curve.

The two RCSMs share responsibility for the summer Sundays DalesRail service between Blackpool North and Carlisle that starts its season on 21st May 2017 and runs on each Sunday through until September. 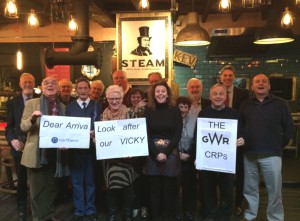 Vicky – just right of centre at her leaving do in Steam at Swindon. CRL promises to look after her in her new role ‘up north’.

The RCSMs report directly to the Client & Stakeholder Managers for each region and will be the first point of contact for CRPs, rail user groups, station adoption groups.