For the last two days Community Rail Lancashire has hosted ten Year In Industry students that have placements with Arriva Rail North.

The students from universities as far afield as Newcastle & Hull joined CRL at Accrington and Burnley Manchester Road to get an understanding of what community rail is all about. They had a basic introduction to the community rail industry and in particular what CRL does in Lancashire. This covered such topics as CRL’s Education Programme, Friends of Stations and station project work including Rose Grove Revived and All Together Now (Pleasington). 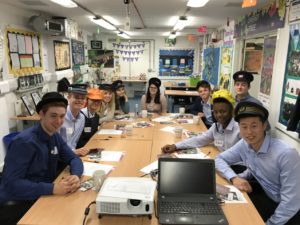 On day two the students had an insight into the Blackburn Station Master Plan that will hopefully see the huge amount of redundant and derelict space at the station renovated and brought back into use. They also had a site visit to the station to see just how bad the situation had become in the unused areas of the station since privatisation was introduced.

Following this they visited Clitheroe to see how a rural bus/rail interchange operates. They visited the LCC operated information and ticket office and also saw first hand how a successful Friends of Stations group works. Ribble Valley Rail, the local rail user group, have ‘adopted’ the stations on the route and have a small group of dedicated ‘Friends’ at each station as far as Entwistle station.