The latest ComREG meeting was held in Huddersfield on Wednesday 13th July 2016. Below is a summary of the outcomes from the meeting:

+  Karen Booth’s contract as Interim Communities & Sustainability Director for Northern ends on Friday 22nd July and Carolyn Watson is taking over the post again on an interim basis.

+  Pete Myers, Stakeholder Manager NE, gave an update on the series of meetings that Northern has arranged with station adopters, both individual and group. The meetings had been arranged to enable Northern to outline its new station adoption policy and to see if any of the single adopters would like to become part of or organise a formal station partnership/friends of group going forward.  The meetings were generally well attended.  RW asked for clarification of the facilitation role envisaged for CRP’s vis-à-vis station adoption groups.  This is work in progress and may well depend on the level of ‘maturity’ of the CRP itself.

+  A review of the new Northern structure was outlined. The four Stakeholder Managers will be supported by four Regional Communities & Sustainability Manager (RCSM). The station manager posts have still to be fully allocated so it was recommended that existing contacts should continue to be used for the time being.

+  Northern’s Community Rail Report and Community Rail Marketing Plan have been formally submitted to the Rail North/DfT partnership. Carolyn Watson asked for any final minor modifications to the CR Report to be notified to her before it goes to print.

+  The Community Rail Report sets out the allocation of the ‘Community Rail Amount’ for the current financial year, which was paid to all CRP’s by 30th April, and the next 2 financial years. RW asked how indexation would be applied to the ‘CRP Amount’ and how the funding to the Barton Line CRP will be reallocated following its re-mapping to EMT (East Midlands Trains).

+  All CRP’s will have received their Service Level Commitment from Northern. This will need to be agreed and jointly signed by the CRP and Northern.

+  When the new RCSM’s have been appointed they will be arranging to meet each CRP and to follow up all the leads that have come in for potential new station groups.

+  Documents such as the Station Adoption Policy, Station Adoption Fund and Seedcorn Fund are about to launched by Northern. There is also a commitment to publish these documents in a Members Only section of the Northern website.

+  There is a commitment by Northern to hold a Community Rail Conference this year. At the moment this looks like being in October in order not to clash with the DfT’s ‘Community Rail Market Place’ being held in London and the ‘Community Rail Awards’ & worksh
op events both of which are taking place late September.

+  Community Rail Lancashire (CRL) submitted an update to the meeting on its school engagement work. CRL is receiving additional funding from ComREG to expand its school engagement programme. Two members of staff have been recruited to accelerate delivery and CRL plans to be in contact with all Northern CRP’s to work with them to develop their own educational programmes.  The funding covers an initial 3 years.

+  ACoRP (Association of Community Rail Partnerships) is about to place adverts for a number of new posts some of which are being directly funded by Northern through ComREG. The posts include a new Chief Executive Officer (CEO) to replace the current General Manager, a Senior Commercial Manager, a Communications & Marketing Manager; an Operations Manager and an Operations Officer and a Tourism & Heritage Officer. The aim is to provide CRP Officers and station groups with much more day-to-day support and access to skills training.

+  A questionnaire will come out soon to CRP’s from Northern on sustainability. Your views will help shape their sustainability strategy which is a franchise commitment due later in this first year of their franchise.

+  Paul Salveson reported that the new community hub known as the “caboose” is now in place on at Llandeilo on the Heart of Wales Line (see illustration below which shows a recent open day which was attended by Paul Salveson, Arriva’s Community Rail specialist and Marcus Handley from Northern. Paul invited ComREG members to visit the hub which he sees as a low cost way of enhancing facilities at a station. The estimated cost of a ‘caboose’ is about £30,000.  The building is intended to be versatile and can be used by local businesses as an incubator unit, community groups, marketing organisations or as a ticket office.

+  The development of Community Business Units will be on the agenda for the October COMREG meeting. 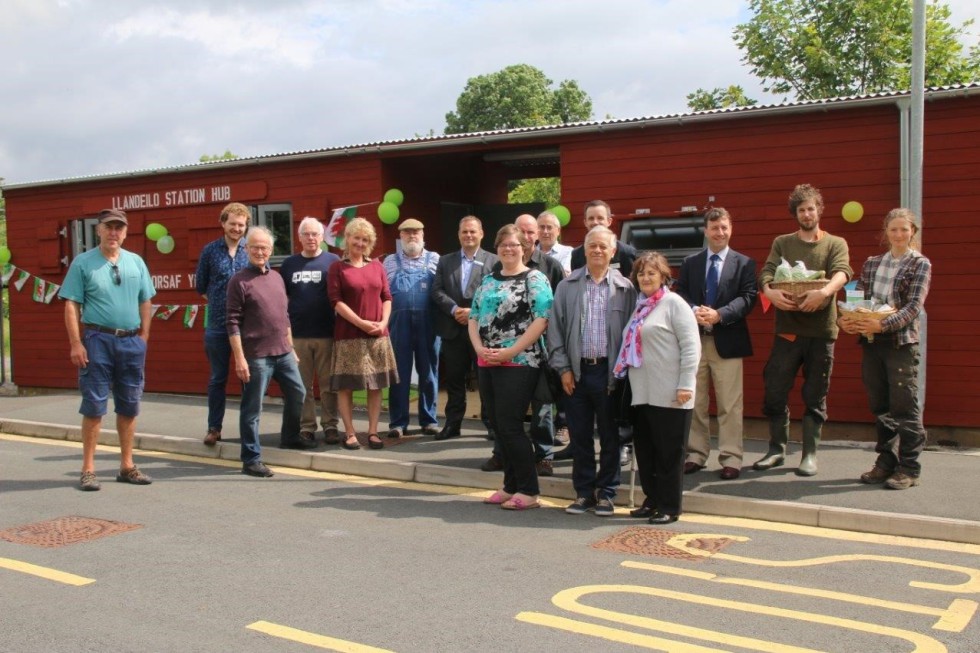 Launch day for the LLandeilo Caboose