Connecting East Lancashire, in partnership with Community Rail Lancashire, were delighted to celebrate the improvements made to Brierfield Station.  With the help and support from the local community, Pendle Borough Council and Northern, Brierfield Station now showcases an array of local images featuring the hidden gems within the borough.  Images promoting the Pennine Cycleway can now be seen on the newly unveiled cycle shelter situated on the car park of Brierfield Station.  Brierfield Children’s Allotment, Leeds and Liverpool Canal and Lomeshaye Nature Reserve are just some of the images brightening up the area. 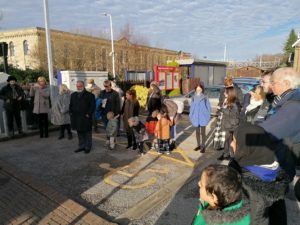 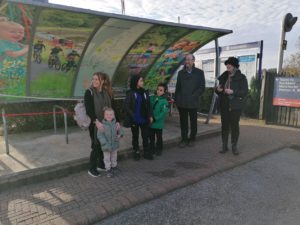 Brierfield Station is now the perfect place to explore Lancashire and is ideally located to access outdoor locations along the Pennine Cycleway, many of which are on the Leeds and Liverpool Canal having had the entrance improved by the Town Council and is just a three-minute walk from Brierfield Station which is now clearly signposted.

This project was funded by Connecting East Lancashire and, in partnership with Community Rail Lancashire, held a celebratory event on Thursday the 2nd of December attended by dignitaries, partners involved in the project and representatives from the local community including some of those who appear in the images. The event was opened by those featured on the cycle shelter and the celebrations continued afterwards at the nearby attraction- The Leisure Box.

Melanie Taylor from Connecting East Lancashire and Chair of the Clitheroe and East Lancashire Community Rail Partnership said, “Hosting this celebratory event was a wonderful way to thank all those involved.  The improvements at Brierfield Station are wonderful and should inspire more people to walk and cycle and explore the local area.”

Richard Watts, Chair of Community Rail Lancashire, commented, “Community Rail Lancashire is delighted to be part of today’s celebration recognising the hard work of many local individuals and organisations who have been involved in a project that has significantly improved Brierfield Station.  The cycle shelter that we are unveiling shows some of the many ‘hidden gems’ that we hope will encourage people to come and explore this lovely area.” 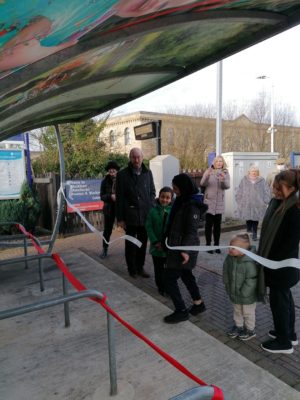 Chris Jackson, Regional Director at Northern said: “I’d like to thank everyone that has been involved with this project, our community partners are the heartbeat of the railway and we’re extremely proud to work closely with them to deliver such a wide-ranging positive impact for the north of England.”

“Northern is committed to promoting cycling as a sustainable and healthy means of transport that complements our train service.”

Wendy Ireton, Volunteer Project Manager of the Brierfield Children’s Allotment said, ‘’ We are delighted that the Little Bobbin’s Child Minding group who have been meeting at the allotment were so enthusiastic to get involved in this photo shoot. Now there is a wonderful picture showing the happiness to be gained from our Brierfield allotment. We hope more people will be curious to find out about this ‘Brierfield gem’ and come and enjoy the lovely atmosphere on the site. There’s a chance to get involved in growing flowers and produce too!”

Councillor Nadeem Ahmed, Leader of Pendle Council, said: “The photos featured on the cycle shelter at Brierfield Station are a fantastic showcase for what to see and do in Brierfield within a very short distance of the station.” “We wanted to show that you can travel by train, bike and on foot to access some beautiful local areas, using the canal towpath to connect up some great routes,” explained Pendle Council’s Cycling Co-ordinator, Tricia Wilson. “Our newly updated Pennine Cycleway map is also displayed,” she said.

Councillor Ahmed added: “The scheme at Brierfield Station is in keeping with the improvement work done at the canal entrance off Clitheroe Road, a short walk away from the station and now signposted. “The improvements to the entrance onto the canal towpath were jointly funding by Brierfield Town Council and Pendle Council.  “They connect with the major transformation of our iconic cotton mill, Northlight, which has a commanding position overlooking the canal,” he stated.