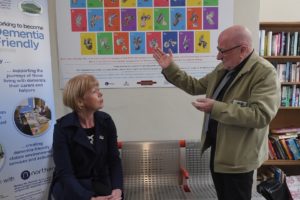 Gerald Townson in discussion with Wendy Morton MP at Bingley

Gerald Townson, CRP chairman together with the CRP’s two Partnership Officers, Catherine Huddleston and Brian Haworth, reflected on the line’s recovery post-pandemic and showed the Minister the CRP’s video ‘We’ve Missed You Too’ which was designed to offer a more personal welcome back to passengers on the Bentham Line and encourage new leisure trips and local journeys.

The Minister was presented with a copy of the recently published Executive Summary of the ‘Bentham Line Strategy to 2042’. Gerald Townson outlined the highlights of the study, including its foundation within local communities which helped form the final document.

The Bentham Line ‘Dementia and Community Rail’ project was included in the Williams-Shapps: Review of Rail, published last year, and the CRP took the opportunity to give an update on this continuing and very successful project. The Minister’s portfolio also covers accessibility to public transport and she is keen to see similar initiatives developed across the rail network. 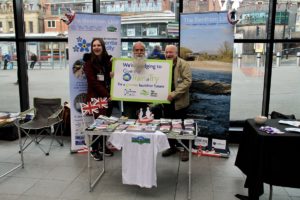 The Bentham Line CRP team on the concourse at Leeds station

Later on during Community Rail Week the Leeds-Morecambe CRP brought together neighbouring community rail partnerships at Leeds Station to promote Community Rail, active leisure travel and ‘staycations’ under the Give the Train a Try national campaign. Representatives from the Yorkshire Coast Community Rail Partnership, North Notts & Lincs CRP and Settle-Carlisle CRP joined in the event which was also supported by visits from Northern Trains, CrossCountry Trains and the Community Rail Network.

During the previous week, the Leeds-Morecambe CRP team had been at Lancaster Station to raise awareness of dementia and their Dementia and Community Rail project with a ‘Bake for Dementia’ event, held in conjunction with the Alzheimer’s Society.