News
Community Rail In The City

The Association of Community Rail Partnerships (ACoRP) is once again taking community rail into the heart of our larger cities. 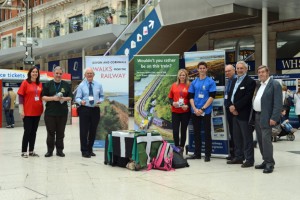 Brian Barnsley, Operations Manager with ACoRP said “This year is record-breaking, with CRPs having a presence at more London stations than ever, including Blackfriars, Waterloo, Paddington, Kings Cross and Liverpool Street”. He added “Everybody has great fun doing the event and this year will be no exception, with Ross Poldark taking time off scything to greet passengers at Paddington station and London Kings Cross having a Magna Carta Knight to keep the peace!”

‘Community Rail in the City’ events will also be taking place elsewhere on the network including Preston, Leeds and Liverpool Lime Street and as usual there will be lots of giveaways being handed out at each of the named stations!

All of this is only possible thanks to the generosity of Network Rail, who gift spaces to ACoRP at most of the stations, with the exception of Blackfriars which is gifted by train operator GTR.

Times vary at each location but if you are passing by or through any of them on 20th May, do come and say hello.

More stations may come online so check the ACoRP website for updates www.acorp.uk.com/events.html