The Clitheroe Line and East Lancashire CRPs met on Friday 22nd February as guests of the Bolton Station Community Development Partnership. The following is a summary of some of the many topics discussed at the meeting.

+  Marjorie Birch, Chair of the East Lancashire and Clitheroe Line CRPs introduced the WiCR (Women in Community Rail) ‘Code of Conduct’, see below, and proposed that this should be adopted. This was unanimously agreed. 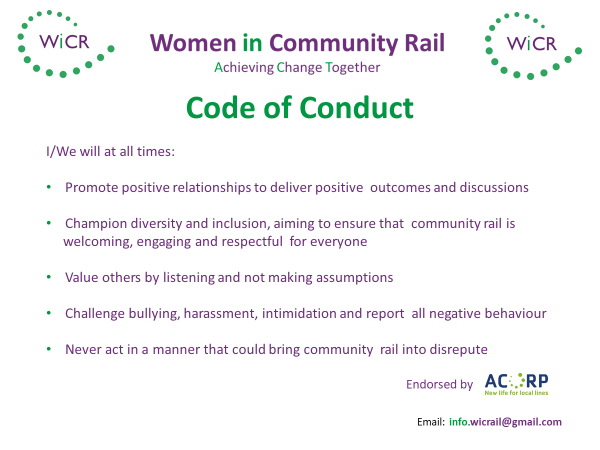 +  There was discussion about the new Accreditation process being introduced by the DfT as part of its new Community Rail Development Strategy. More will be learnt about this at the Community Rail Conference being arranged in March by DfT and ACoRP.

+  On train service development the CRP was delighted to learn that from May the Preston to York inter – regional service would once again start from Blackpool North. Apart from this and a new 1715 Preston to Blackburn all stations service there are no other changes to East Lancashire or Clitheroe Line services.

+  Northern reported that performance of both the Clitheroe and Colne services had seen considerable improvement since the autumn.

+  Sunday 19th May sees the start of the new DalesRail season. After last years problems considerable discussion has taken place with DfT and Northern to ensure that this year the season goes smoothly. A marketing plan has been drawn up by Northern and Community Rail Lancashire to look at potential new markets and ways to promote the service to a younger audience. Plans are also being developed to re-launch the service with a special event . It was also noted that 156 464 still retains its DalesRail branding and it is hooped that this unit will be seen on the service during the season. 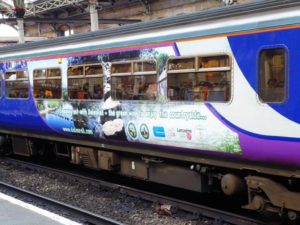 +  2019 also marks the 25th anniversary of the return of regular passenger trains between Blackburn and Clitheroe. Plans are also being developed to mark this occasion which may be linked to the re-launch of DalesRail.

+  A brief update was given about the ‘Connecting East Lancashire’ project. Site meetings have taken place at Ramsgreave & Wilpshire and Colne stations and will be taking place at Brierfield shortly. A key issue at Brierfield is the issuing by Network Rail of a licence to cover the disused platform at the station.

+  The news that CCTV is to be installed to cover the platforms at Accrington station was welcomed. The station has been blighted by anti social behaviour and repeated vandalism to the wooden eco-waiting shelter.

+  Since the last meeting Community Rail Lancashire had submitted an Expression of Interest to Lancashire County Council to take over the running of the Booking and Information office at Clitheroe Interchange.

+  Dax Byrne-Turner from BtP gave a very interesting presentation about the use of ‘Community Protection Notices’ as well as some of the issues that have been affecting Accrington station and performance.

+  The CRPs noted the on-going education engagement work being carried out by Community Rail Lancashire covering KS2 primary children and also a range of special schools as part of the Railway Confidence and On Track to Train initiatives.

+  Derek Jennings and Peter Eastham reported on the valuable work being carried out by the station adoption groups on both lines.

+  Paul Salveson, Chair of the Bolton Station Community Development Partnership, reported that the recent AGM had agreed that the group should look to forming a CRP to cover the whole Bolton borough area.

The next meeting of the Clitheroe & East Lancashire Line CRPs has been arranged for Thursday 2nd May.

To find out more information about the CRPs or about any of the station adoption groups in East Lancashire you can: