Elections for the posts of Chair, Vice Chair and Secretary were held and the following were all re-elected nem. con.:

The Chair then gave a report covering the period April 2016 to March 2017. James spoke about the new franchises for Northern and TransPennine Express that started on 1st April 2016 and how the key word is ‘investment’.

Northern, the franchise that covers all of the Community Rail Lancashire routes, has been split into four business units and has set in motion exciting plans for accommodating passenger growth and delivering the transformational railway many of us have been campaigning for over a number of years. New services and timetable improvements will be supported by the introduction of new and refurbished trains which will operate from more staffed and better stations and mobile apps will be developed to make checking and booking more flexible tickets easier for the general public. 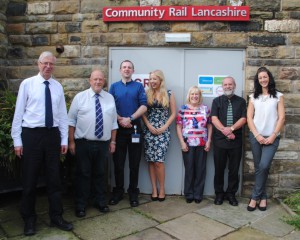 James also spoke about the volunteers that carry out work that makes such a huge impact on our stations. He also recorded his thanks to the Community Rail Lancashire team and all the hard work in helping to deliver the action plan.

James’ full report can be downloaded by clicking this link: Chairman’s Report 2016/17.

A routine Management Group Meeting was held after the AGM and covered topics including the Partnerships Secretary’s report. Richard covered details of the grants for the forthcoming year from Northern which include the continuation of the Education programme expansion.

Richard also spoke about the Office of Rail and Road’s official footfall figures for stations and how the introduction of the Blackburn to Manchester/Wigan via Todmorden had seen sharp increases of passenger numbers at Accrington (13%), Rose Grove (33%) and Burnley Manchester Road (44%). Richard also reflected that engineering works on the Bolton corridor had seen footfall at stations on the Clitheroe Line fall in the last reported year.

Northern reported that performance was still slightly below target, but that customer satisfaction was recorded at 86%. Also noted that the new trains are on schedule and that the new ‘toilet roll’ length on train tickets are to be made shorter and that gatelines are being updated to accept all types of ticket.

Network Rail reported that they had held a successful Community Rail Day with staff from ACoRP. They also noted that an ‘off track’ team will be working at Huncoat shortly and that they are developing plans for the possible closure of Daisyfield Level Crossing.

Dax Byrne-Turner from the British Transport Police thanked CRL for its continuing education programme and commented that in his 6 years with the BTP he has never had to deal with anyone who has taken part in the school programme as a younger child.  He also commented that in his work across the UK he has never encountered a scheme that compares with that delivered by CRL, “There is nothing else that comes close to how well it works”.

Also noted that anti-social behaviour at Accrington continues to be an issue and it was suggested that the BTP base themselves in the Bunker at Accrington for a period of time to try and deter the trouble makers.