In January 2017 TravelWatch NorthWest, an independent company who champion the interests of public transport users in the region, published a report on rail/bus integration.

The paper called ‘Integration Between Rail and Bus at Rail Stations’ is a report on guidance and convenience for passengers. The report covers in detail 42 stations that were surveyed in October & November 2016 across the North West. The stations surveyed were operated by Northern (20), Virgin Trains West Coast (10), Merseyrail (7), Manchester Metrolink (3), First TransPennine Express (1) and Arriva Trains Wales (1).

In the immediate Community Rail Lancashire area the stations looked at included some on the Clitheroe Line, the East Lancashire Line and the South Fylde Line.

Information regarding buses was found on platforms at 9 out of 20 stations and at entrances/concourse at 15 out of 20, but clear signage to buses was poor with only 6 out of the 20 meeting the mark.

One of the best stations on the area was Clitheroe with the Bus Interchange clearly visible from the station booking office and Clitheroe is regarded, in the report, as a good example of bus/rail interchange. 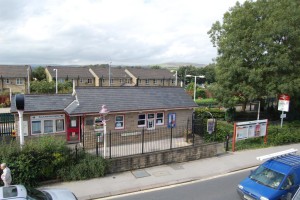 At the time of the surveys Accrington station did not fare quite as well but the brand new bus station is within a five minute walk from the station. Since the date of the survey a monitor has been installed at the station as part of the Pennine Reach Project, and this shows bus departure times and stand number information for the bus station. 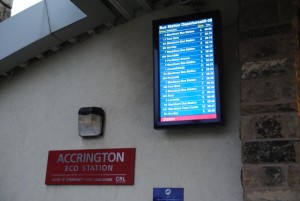