The changes needed for Preston station to be part of the UK’s new high speed rail network have been revealed. 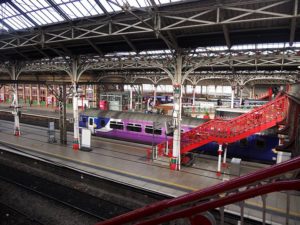 The blue areas in the image below show existing platforms, while the orange shows where platforms 3 and 4 would be extended, and where the new footbridge would be built.

HS2 will provide new track for long-distance services, delivered in phases. The changes to Preston Station are set to be undertaken during Phase 2b. When the HS2 network is fully open, a connection to the West Coast Main Line at Wigan will mean more trains coming through Preston. Services from Preston to Birmingham will take 50 minutes rather than 96, while Preston to London will reduce to 78 minutes from 128 minutes.

According to HS2, the new network could mean 75,000 extra visitors a year to Preston, adding £3.3 million to the city’s economy annually.

Councillor Peter Moss, Deputy Leader of Preston City Council and Cabinet Member for Planning and Regulation, said: “We welcome the planned investment for Preston station, which is a main gateway for the city and the wider county. We’re excited to be working with HS2 and our partners in the city to develop the station and improve the passenger experience for everyone. These developments will help to cement Preston station as a key transport hub for the region with faster links to all parts of the UK including London, Birmingham and Scotland.”

More details on HS2 phase 2b can be seen on the YouTube video below: