The next train to arrive at Platform 5 at Bolton… is a work of art. As part of the station’s current regeneration, a brand new gallery has opened on Platform 5 on Bolton station. 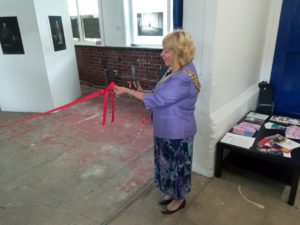 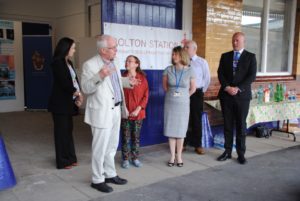 The gallery project is a key part of the partnership’s vision to transform Bolton station into a thriving community hub, involving young people in a range of arts activities. Arts co-ordinator and vice-chair of the station partnership Julie Levy said “It’s wonderful to see what was once a boarded-up room full of junk, transformed into an art gallery. We’ve been delighted by the support we’ve received from Northern, Network Rail, TransPenine Express, station facilities managers ISS, contractors TMT and Transport for Greater Manchester. Several railway staff have given their time for free and we’re immensely grateful.”

Chris Jackson, Northern’s director for the company’s Central region, expressed delight at what had been achieved and reminded guests it was only a beginning. “We are looking forward to seeing much more of the station transformed into vibrant community spaces, including the former training rooms upstairs which have been out of use for several years. We are working with the partnership and the University of Bolton and Network Rail to make it a facility to be proud of.”

Network Rail has been key partners in the project and have put substantial funding into the station to improve passenger facilities and provide the community space. Danielle Lahan said that Network Rail was fully committed to the project and had enjoyed working with their Bolton partners.

Sam Johnson, Dean of the Faculty of Arts at the University of Bolton said she was delighted by the transformation of a room that had been out of use for decades and was now displaying quality art work by Bolton students. The university is aiming to take on the lease for much of the empty space on the station with a range of projects involving both students and the wider community.

Bolton Council has been a strong supporter of the project, with its Library and Museums Service being involved from the partnership’s earliest days. Councillor Stuart Haslam, Bolton Council’s Cabinet Member for Transport, paid tribute to the work that had already been done in what he described as an ‘amazing project’. After the speeches, Cllr Hilary Fairclough, Mayor of Bolton, welcomed the new addition to Bolton’s arts scene and declared the exhibition open.

The exhibition opens to the public between July 18th and 20th as part of the Manifest Arts Trail taking place across Greater Manchester. It  is the first of many exhibitions planned for 2019/20. “We want to showcase local artistic talent,” said partnership chair Paul Salveson. “We are also keen to encourage railway workers themselves to submit their art work and we are working on plans for a world first – a national exhibition of Railway Workers’ Art that could rival the ‘Pitmen Painters’ from the mining industry”. 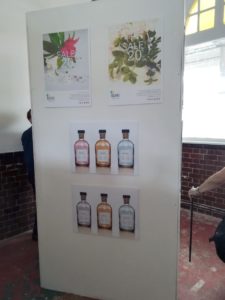 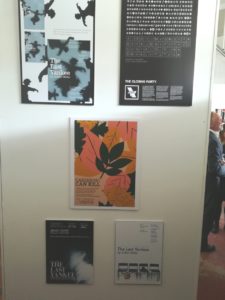 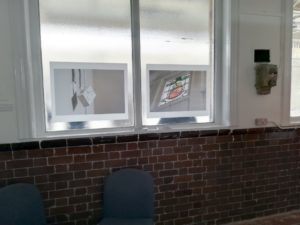 Bolton Station Community Development Partnership is a voluntary group, working with its rail industry partners and a wide range of community groups and businesses, including Community Rail Lancashire, Bolton Rail Users’ Group and local schools. It is part of the newly-formed Bolton Area Community Rail Partnership.

The station partnership welcomes new volunteers and is keen to hear from artists interested in displaying their work – including the proposed ‘Railway Workers’ Art’ event. Contact boltonstationCDP@gmail.com or ring 07795 008691