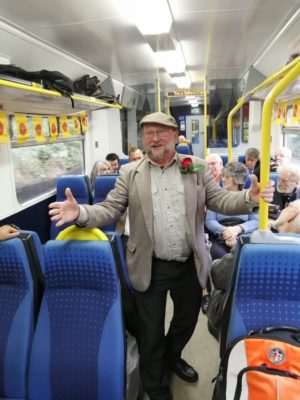 Probably the most unusual celebration of Lancashire Day (November 27th) took place on the 11:05 train from Manchester to Preston. Eighty guests of the newly-formed Bolton and South Lancashire Community Rail Partnership (BSLCRP) were entertained with music, song and dialect poetry. Guests, including the Mayors of Bolton, Horwich and Adlington, joined the train between Manchester and Preston before returning to Bolton fir further celebrations.

At Bolton station, four poems were unveiled on the large bridge supports on Platforms 3 and 4. Two were quintessentially Lancashire – ‘A Lift On The Way’ by Edwin Waugh (1817-1890), and ‘A Gradely Prayer’ by Bolton author and mill worker Allen Clarke (1863-1935). Two other poems unveiled were by the great American poet Walt Whitman (1819-1892) who had close links to Bolton. ‘A passage to India’ features railroading across continents while ‘To a Locomotive in Winter’ is a celebration of steam locomotion. The poetry pillars’ is an initiative of Bolton Station Community Development Partnership, which is a core member of the CRP. 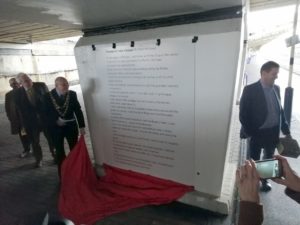 The day was the official launch of the new community rail partnership for Bolton and South Lancashire. It aims to strengthen links between the railway and the communities it serves and covers routes from Bolton to Manchester, Wigan, Preston and Blackburn (as far as Bromley Cross). The partnership will be looking at innovative and creative ways of bringing communities closer to their railway network, and today’s event was an example of what can be done.

After the unveilings, guests enjoyed a hotpot lunch provided by The Kitchen, a local social enterprise, in the Community Room on Platform 5. Further entertainment was provided in the adjoining Platform 5 Gallery by Sid Calderbank, Alyson Brailsford, Mark Dowding and Julie Proctor.

The event was supported by Northern, Network Rail, Bolton at Home and TransPennine Express.

“The series of events were an amazing celebration of Lancashire culture and history,” said Partnership chair Paul Salveson. “The four poems are now displayed on the station platforms for everyone to enjoy. I’m particularly pleased that the work of Allen Clarke, one of the North’s most neglected writers, is celebrated in his home town, at the station where he often departed on his travels across Lancashire.”

It is hoped that more poems, including contemporary work by local writers, will be displayed at the station over the coming months. “The poetry complements the paintings and photographs we are showcasing in the Platform 5 Gallery,” said Julie Levy, gallery co-ordinator. “Our next exhibition will feature the work of Westhoughton artist Andy Smith.”