Rail Minister Paul Maynard MP, Northern and Network Rail have officially opened a new £23m train maintenance depot in Blackburn. The facility will be used to maintain up to 30 Northern diesel trains and will be a key part of the modernisation of the railway in the north of England. Part of the wider Great North Rail Project, the depot was constructed by Network Rail and boasts state-of-the-art engineering equipment as well as advanced environmental features. In addition to the new maintenance depot, Northern is making a further investment in Blackburn with a new operations facility.  Opposite Blackburn station, the facility will provide a base for drivers and conductors working in the area. 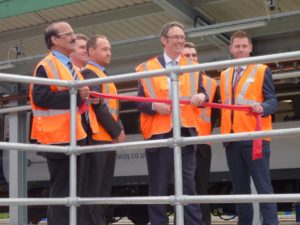 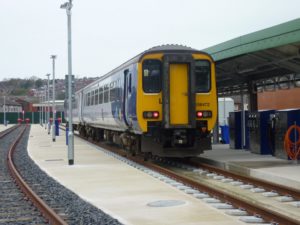 Liam Sumpter, Regional Director at Northern said: “The new depot has been constructed to the highest specification and features a six-track train stabling and maintenance building, as well as train washing and fuelling equipment. “The Blackburn site will house trains that will be re-routed following the electrification of the Blackpool to Preston line and, as such, is a vital part of the modernisation of rail in the north of England.” “The depot is a fantastic example of what can be achieved through partnership work and I was delighted to be able to welcome Rail Minister Paul Maynard to carry out the official opening.”

The depot forms part of an ambitious modernisation programme at Northern and will be home to more than 100 employees. As part of these plans, Blackburn and the surrounding area will also benefit from station improvements, more rail services and new or ‘as new’ trains; all providing better journeys by 2020.

Rail Minister Paul Maynard said: “I’m delighted to officially open this state-of-the-art depot for Northern. It’s a big step in the transformation of rail services under the Great North Rail Project. “It’s also demonstrates what can be achieved when government, train operators and infrastructure managers work together to put passengers at the heart of everything we do.” Andy Morgan, senior sponsor at Network Rail, said: “By 2022 the Great North Rail Project will have delivered more than £1bn of improvements for customers across the north of England. By increasing capacity by 40 per cent, passengers will see more journeys on better, faster trains. “As we unlock capacity across the north as part of our Railway Upgrade Plan, Northern and TransPennine Express are upgrading trains and building new ones for customers. We need to ensure there are facilities for these to be cleaned and maintained each night for the benefit of the thousands of customers who travel on them each day.”

When Community Rail Development officer Brian Haworth heard about proposals to build a new diesel depot on the site of the old coal yard at the Wrangling in Blackburn he approached Network Rail and asked if the old Lancashire and Yorkshire boundary stone could be saved and re located within the new depot.

After discussions with Lauren Jones from Network Rail it was decided to work the stone into an art project which would sit at the entrance to the depot. Local artist Alastair Nicholson and Brian got together and came up with a project which would involve the nearby St. Luke & St. Philips Primary school and which would highlight the sites long association with the railway. The railway connected coal yard was opened on the 16th December 1848 by the East Lancashire Railway to supply the local mills with coal. The site was in constant use until the mid-1980s when the depot closed.

The opening of Northern Railways new six road depot on this site continues the railways long association with the site known locally as The Wrangling. The two sided laser cut stainless steel sculpture is mounted on a brick plinth which incorporates the original Lancashire and Yorkshire boundary stone. The children from St. Luke & St. Philips worked with Brian and Alastair to produce images for the sculpture in the form of paintings and drawing. The work was then digitally photographed and developed into a computer based design which would enable a laser cutter to transfer the information from computer to stainless steel plate. Lasers were used to cut the plastic inserts which gives a stained glass effect to the sculpture. 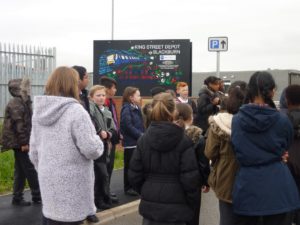 Network Rail provided the lighting for the sculpture amongst other things and were very supportive throughout the project allowing the children to visit the site during the works to view progress. During one of the site visits the children were given a talk on rail safety by Network Rail. The front face of the sculpture shows a modern diesel and below the children’s interpretation of how things could have looked in earlier times. The sculpture lists all the railway Companies who have been involved with the site over the years. The back face of the sculpture shows how coal is formed, mined, and distributed. All work carried out with the school was aligned to the National curriculum.