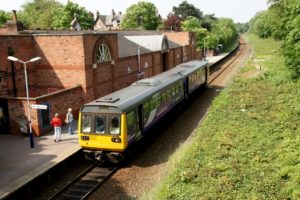 Local Fylde MP Mark Menzies and his Blackpool South counterpart Scott Benton have collaborated and lodged an initial bid to the ‘Restoring Your Railway Ideas Fund’. This is the first stage in a process that could see the doubling of the train service on the South Fylde Line.

The MPs joined forces to put together the bid for a passing loop on the line, which would allow for a service between Preston and Blackpool South every 30 minutes.

The scheme is being supported by Northern, the local train operator; Rail North & Transport for the North; and local councils, as well as by the SFLCRP and CRL.

CRL recently funded a study which was carried out by Network Rail, using a seed corn grant from Northern. The findings of the report have been used to support the MPs application and provided three options for a passing loop.

Mr Menzies said: “Ever since I was elected as Fylde MP I have called for a passing loop on this line. It is vital we improve services to make this line viable for commuters and students to use. For too long we have been short-changed on our railway.

“Too many services have been running late and too many are cancelled. The potential of a two-hour wait between trains means many people will not even consider using the line.”

Mr Benton added: “On top of the three per cent of services that were cancelled, we have some 173 services in the past 12 months which turned back to Preston early and did not reach Squires Gate, Blackpool Pleasure Beach or Blackpool South.

“That is the equivalent of the loss of nine and a half days’ services. We must have a better rail system to give people in Blackpool South the opportunity to work and learn further afield.”

If successful it could see the laying of up to three miles of track between Lytham and St Annes stations, the installation of a second platform at Ansdell and Fairhaven Station, improvements to the signalling along the line, and potential platform changes at Preston Station.

Three feasibility studies have been carried out on the line to highlight the need for improved services.

Mr Benton said: “We need to move people away from a reliance on cars, and improved rail infrastructure and services to the Fylde coast are a must. There should be hundreds of thousands of tourists arriving in Blackpool South by rail every year, but we see a fraction of that.”

Mr Menzies added: “We must have better infrastructure to get people to and from our coastal communities, to make sure people can access the fantastic restaurants, shops and service businesses in the heart of our communities.”

Rail lines were improved between Preston and Kirkham during the electrification of the Blackpool North line, however the branch line remains a single track ‘long siding’ between Kirkham North Junction and Blackpool South, currently limiting train services to one per hour.

“When the SFLCRP was first established in 2007 the key issues identified by passengers in research commissioned by the CRP were the frequency and reliability of the train service. Nothing has changed and both issues remain live today. One way to improve matters would be to restore some of the double track ripped out in the 1980s to improve both the frequency and reliability of the service. Without this investment the line will continue to be just a long siding that soldiers on.”

“I fully support the bid to create a passing loop on the South Fylde Line. The idea of a ‘passing loop’ allow two trains on the branch line at the same time has been muted before. Having the support of our two local MPs as well as the borough and county council is a big boost and If successful it would lead to an increased frequency of trains and a more reliable service for all rail users.”

See below for the three options for a passing loop: 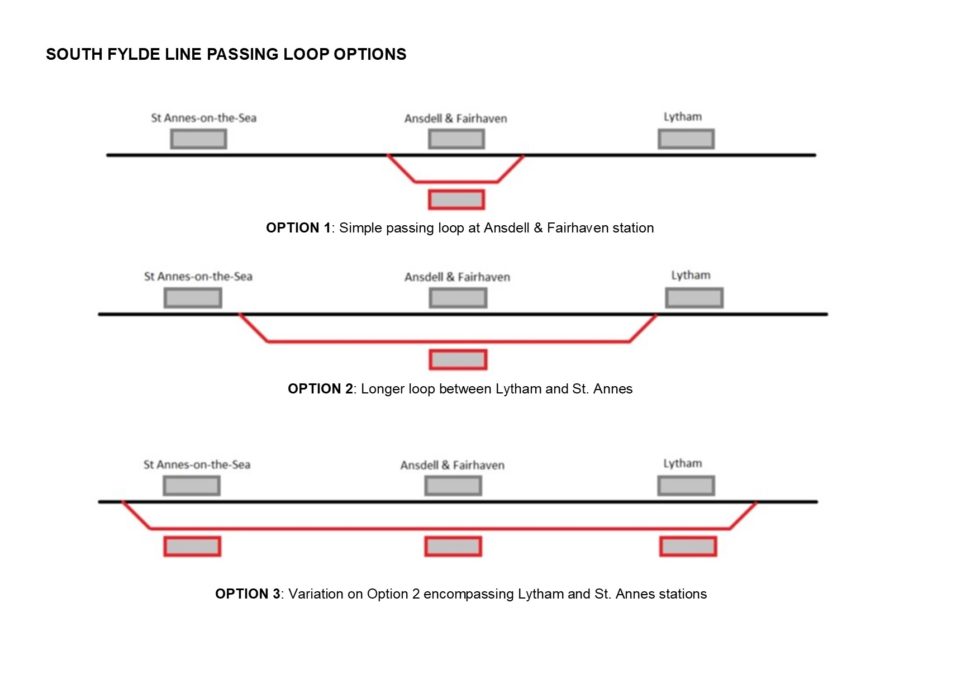