Bentham station in North Yorkshire has been involved a very different kind of twinning scheme! Their toilet has been twinned with one in Guatemala. 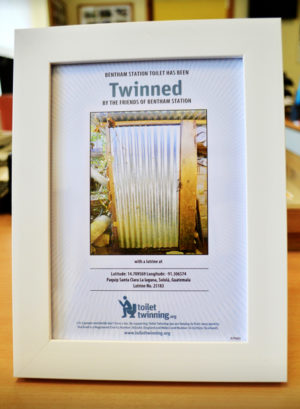 August has seen Bentham station gain a second and unusual twin. A toilet used by passengers and visitors to the station has been twinned with a latrine in Guatemala, central America. The latrine is located on the outskirts of a small village called Paquip, close to the town of Santa Clara La Laguna, in the Sololá region of Guatemala. It is siuated on a mountain side overlooking Lake Atitlán. The precise location is Latitude 14.709569° (North), Longitude -91.306574° (West). You can locate the site by entering the latitude and longitude into Google earth or Google maps and various websites will tell you more about the area.

More than half the population of Guatemala live below the poverty line. Poverty is particularly prevalent among Guatemala’s indigenous Mayan population, who tend t olive in remote rural areas, often beyond the reach of state support. Up to 80% of the country’s water sources are contaminated, particularly due to poor sanitation. Water-borne diseases are a significant contributor to high rates of mortality and malnutrition, especially among indigenous children.

Toilet twinning is a water and sanitation initiative aimed at ‘flushing away poverty, one toilet at a time’. By donating £60 to twin your toilet you help those in poverty to have access to to a proper latrine, clean water and the information they need to be healthy.

Hopefully this Friends of Bentham Station (FoBS) decision will encourage businesses, other groups and individuals in Bentham and the surrounding area, as well as other station adopters, to take part in the programme, which does not just cover Guatemala but also Afghanistan, the Democratic Republic of Congo, Liberia, Malawi, Myanmar, Nepal, Pakistan, Tanzania and Uganda.

For more details about the ‘Toilet Twinning’ scheme visit toilettwinning.org.

In addition, Bentham and Mytholmroyd stations, and their station adoption groups, have now been twinned for two years. Second anniversary celebrations are being held at Bentham on 14th September and at Mytholmroyd, in the Calder Valley, on 28th September. At the same time FoBS will be marking their seventh year since formation and Mytholmroyd their  twelfth. Both groups continue to be recognised for their leading work in community involvement and in bringing the railway and communities closer to each other.