Over the last two months The Bentham Line CRP has held a number of dementia awareness-raising sessions have been held for railway staff employed by Arriva Rail North Ltd. (Northern), the local train operator, together with other interested parties.

These have been led by Gerald Townson and Rod Tickner, Chairman and Vice-Chairman, respectively, of the Leeds-Morecambe Community Rail Partnership (The Bentham Line CRP). These are part of the ‘Dementia and Community Rail’ project which began a year ago, with better staff awareness and understanding as one of the key components of the overall project. 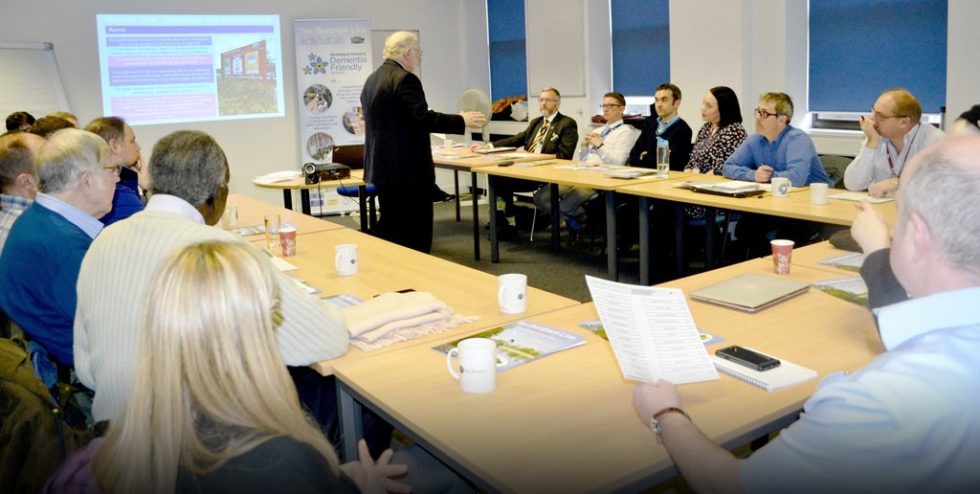 There are three main aims to the project. The Bentham Line is ‘working to become dementia friendly’, by:

+  Supporting the journeys of those living with dementia, their carers and supporters;

+  Raising awareness of dementia with staff, volunteers and passengers; and

Gerald Townson, the CRP Chair explains:  “In a trial in the North East in 2016 rail travel was arranged to the coast at Saltburn for a group of people living with dementia, which proved incredibly powerful and helped those travelling to reconnect with their memories.”

This acted as a foundation for the members of the CRP who have worked to set up this project and who are now working to create the first dementia-friendly line in the United Kingdom.  This project is also benefiting from the positive support of the Alzheimer’s Society, Alzheimer’s Research UK and the Association of Community Rail Partnerships, as well as many local groups along the line.

In February 2017 substantial seed-corn funding was granted to the CRP by Northern, for a pilot project aimed at making the experience of a rail journey and associated activities more dementia friendly.

One of the reasons for choosing the Bentham Line is it is relatively self contained, with a range of stations, a spectacular scenic journey and great destinations.  The train crew for the route are all based at one depot, Skipton, thus easier to make arrangements.  There are about 100 staff and volunteers to be involved and if successful locally it is expected that the project would be rolled out over the whole Northern network and all 5,500 staff.

The Bentham Line has a range of stations from small unmanned stops such as Wennington or Clapham, over a mile from the village, through to partially staffed stations such as Morecambe.  It also has some of the busiest stations in the area with Keighley and Shipley both seeing about 1.7 million passenger journeys a year.  Thus, the ideas developed can be tested in a variety of environments.

For many in the Aire Valley and Bradford, Morecambe was the principal holiday resort and there is still a steady flow to Morecambe; thus, the line would be associated with memories of times past.

In mid-January 2018, at Skipton Station, Bentham Line officials gave their first sessions aimed at raising awareness of dementia and how to respond effectively, for railway staff. These sessions included local conductor-guards, Paul Mason and Richard Barker who subsequently took part in the filming for two videos.

In early February alongside Northern, the Partnership took part in the creation of two supporting videos. Part of this shows the interaction between a conductor on a train and a person living with dementia, showing both good and bad practice. There were also interviews with individuals about their experiences of caring for someone with dementia. The second film is linked to dementia-friendly travel on the line and a dementia-friendly walk along the promenade at Morecambe.

The second awareness session was held with a much larger group at Accrington Station. There, the CRP were able to speak to the apprentices employed across Northern and the Community Rail Lancashire team, as well as other interested parties.

Rod Tickner commented, “One of objects on display in the room was the 1950s railway rule book.  I used it to highlight that while rules were crucial in a safety setting, rigid adherence with regard to tickets, for example, was an area which could give rise to bad feelings for those living with dementia.  As their feelings are less prone to being forgotten than facts, then such an approach can be very negative for such people. There needs to be an element of discretion in how such matters are handled with sensitivity and compassion as key watchwords.  There is a strong and clear need to see each person living with dementia as an individual.”

After a successful session held in late March, which senior management and directors of Northern attended alongside front-line staff, Pete Myers, Stakeholder Manager for Northern said:  “this was the start of a programme that we are running on the Bentham Line to make this the first of our ‘Dementia-Friendly’ routes and we will be using the outcome of today to help our people at Skipton, who work the Bentham Line, to truly understand the needs of those who are living with Dementia.”

Pete added, “It was a truly inspirational event and our people clearly got a great deal from it, more important the delivery by the ‘Two Gentlemen of Bentham’ was outstanding, engaging with all throughout not least the gentlemen present who were actually living with dementia and without whom the event would not have been half as powerful. I do genuinely believe that this is what Northern is all about.”

There is a good deal of interest and support for the project at the Department for Transport in London. Other train operating companies are very interested too, including CrossCountry and Arriva Trains Wales. Representatives of the latter will be visiting the Bentham Line later this month.

Gerald Townson concluded; “it is good that we have now started on actual delivery of the sessions which will continue throughout the summer and which we hope will be then rolled out across the remainder of the Northern network. Ultimately, we know that other operators are very interested in what we are doing.

Rod Tickner, who is also a Dementia Champion from Dementia Friendly Keighley, is delighted to be able to provide the ‘Dementia Friends’ input which is included in the sessions. (This is in support of the Alzheimer’s Society’s initiative which has now created over 2.3 million Dementia Friends across the UK.) Specific aspects of a train journey are then highlighted, such as buying a ticket, passing through ticket barriers, on the platform, on the train and changing trains, underlining the need for a complete positive rail experience for passengers who are living with dementia and their carers.”

The CRP are now looking forward to the formal launch of the project during Dementia Awareness Week, 21st to 27th May 2018.