Following on from the success of the historical posters designed by the Leeds-Morecambe Community Rail Partnership,  (LMCRP), for Bentham and  Wennington stations and the closed stations served by the old  ‘Little North Western’ Railway, new artwork panels have been created for other stations along the Bentham Line; this time those in the Craven area.

The research, photographs and descriptions for the new panels are the work of Brian Haworth, Community Rail Partnership Officer with the CRP and a keen railway historian.

Brian with the Clapham & Giggleswick posters

At each station, the panel shows the station in its previous forms as well as an up-to-date image, alongside a brief overview of the changes which have happened over time from the opening of the Skipton to Morecambe section in 1850.

The posters for closed stations such as Hornby, Caton and Halton hang in local village halls. One has also been prepared for the former Lancaster Green Ayre station which is displayed at the new fire and ambulance station, close to the original railway site.

The newly created station history panels are now on display at Clapham, Giggleswick, Long Preston, Hellifield, Gargrave and Skipton stations. Clapham and Gargrave still have some of the original buildings from the line’s early days. 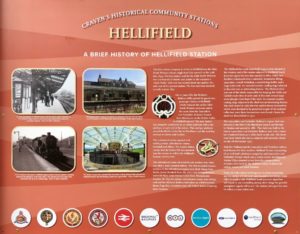 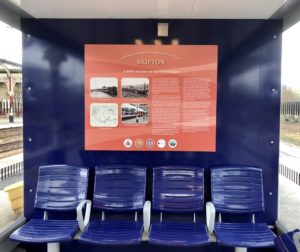 Gerald Townson, LMCRP Chairman said,  “It is important to record and share the history of this early trans-pennine route linking Leeds and Heysham with local residents and visitors, especially now as numbers using the Bentham Line continue to grow.”

The Partnership is now looking to create at similar panels for the western end of the line between Carnforth and Heysham Port, including Lancaster and Morecambe.  Interestingly, this part of the line was also famous for a ‘pioneering’ electric service with overhead cables brought into use in 1908.  It was converted to 25,000 volts in 1953 and continued in use until closed in 1966.  It was used as a test bed for the eventual electrification of the West Coast Main line.