‘Access for All – a new initiative by Northern’s Year in Industry students for the Bentham Line.

“Very rewarding to make a difference to people’s lives by with a few simple additions at stations.” Joshua.

“Great to have the freedom to make a real difference on the Bentham Line.” Michael.

These are just two of the comments made by a group of ten students who are participants in Northern Train’s ‘Year in Industry’ scheme for 2021/22.  The students have been placed in a variety of departments within Northern and in different locations, so the ‘Access for All’ project has given them a chance to come together and work as a team.  The Leeds-Morecambe Community Rail Partnership (CRP) has once again helped to provide the focus for their project. This is the fourth successive year that the Bentham Line has supported the students. 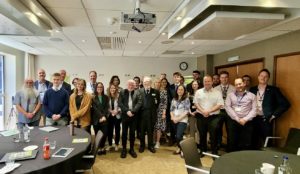 The students enthusiastically and confidently presented details of their ‘Access for All’ project to a group of colleagues from Northern, including senior managers and directors, together with representatives of the CRP, on Monday 20 June 2022 in Leeds.  These are some of the student’s points made during the presentation.

“Good to get a different perspective from our day jobs sat behind a desk and to work with peers as a group rather than as an individual, which is a real gain for us.” Jack.

“This helped us to think outside the box as we came together to create something that would make transport more accessible to all.” Nicole.

“One of our sessions was with Rod Tickner, CRP vice chair and an Alzheimer’s Society Ambassador. He led us through dementia-awareness sessions and we all became dementia friends. This is one of the areas which lays behind the work we are presenting.” Laura.

“A great learning curve, we had to overcome a lot of challenges, but it was a great end result.” Nieve.

The Northern directors present emphasised the considerable importance they attached to the students’ work. Claire Weir explained that since 2016, Year in Industry student programme has been part of Northern’s approach in providing the opportunities for undergraduates to experience working in a corporate environment within a diverse industry.  “The Bentham Line provides great opportunities where the students can work together and draw on the enthusiasm of Gerald Townson and Brian Haworth for a community-based railway.  We are really proud of what they have achieved and hopefully they will be able to reflect on the creative value they have brought to the project as a team. I am sure this will stand them in good stead for their future careers.”

Gerald Townson, Chairman of the CRP, in offering his sincere thanks to the students for their enthusiasm, time and determination said;  “Community Rail has acted as the ‘glue’ between the students throughout their time in the rail industry.  This helped them to achieve a successful wide-ranging project together, to create a good team spirit and to enjoy a rewarding experience.”

The students took the theme of ‘Access for All’ and decided to focus on a number of aspects.

The first was to produce a booklet. It starts by giving general information about physical arrangements at stations and on the trains such as ramps or priority seating, and also using the trains as well as buying tickets and details of the trains on the Bentham Line.

This is followed by detailed accessibility information for each station on the Bentham Line from Heysham Port to Leeds. Each station entry lists the facilities available which could help everyone in planning their journeys, including those with mobility problems and hidden disabilities.

An additional feature in the booklet is the use of a QR code for each station. This allows the user to link to a 3-minute, 360° interactive video about the station layout and facilities. The 21videos, created by the students are available on the CRP’s website: thebenthamline.co.uk  There is also a video of the Class 158 units used on the route and their facilities.

The booklet and associated poster campaign has been supported by a grant from Northern’s Seed Corn Fund. It is the first line-specific accessibility booklet to be produced and has already been seen as model for other lines to consider.  Copies of the booklet are available at staffed stations on the route and by post from the CRP’s offices at Bentham station, LA2 7LF.  Telephone: 015242 98940. It can also be downloaded from the above website.

The students also wanted to ensure that there would be some infrastructure improvements which although simple, could be of immediate and lasting benefit.  With support from the CRP, new access signage at Bentham, Long Preston and Shipley was commissioned and is now in place.  A dropped kerb has been added at Steeton and Silsden to improve accessibility and handrails have been added to platform steps at Bentham station.  Accessible car parking spaces have also been planned for several stations.

These were some of the concluding thoughts from the students.

“Have made a lot of friends.” Nieve.

“Brilliant to give something to the community.” .

This year’s cohort of students were Jamie Ashton, Nicole Collingwood, Jake Coote, Matthew Foster, Sinan Gilroy, Laura Griffin, Nieve Kavanagh, Michael Longstaff, Joshua Kennedy and Jack Whyles. They are studying in a range of universities across the north of England with diverse subjects such as geography, business management and psychology among others.