The question was – can you travel on all seven of the lines in the Community Rail Lancashire area in one day?

The challenge took careful planning and a final itinerary was drawn up that, on paper, made it look like something that could be achieved. It was agreed that the challenge should be done to raise money for a charity and it was decided to support the Bentham Line’s ‘Dementia Friendly Stations’ project and raise funds for the Alzheimer’s Society.

On Thursday 21st September 2017 Simon Clarke, one of CRL’s Development Officers set off to try and see if it was possible. An very early start saw Simon catching the 05:04 service from Accrington to Colne to start the challenge proper. 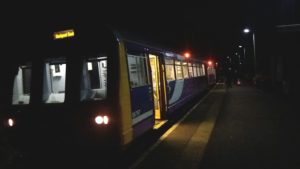 The first two lines; Colne to Preston and Preston to Blackpool South were ticked off by 07:15 and Tony Ford, chair of the South Fylde Line CRP was on hand to pass Simon the first donation of the day. 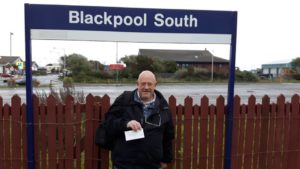 Next was the challenge of getting to Leeds in time to make the only train of the day to go through from Leeds to Heysham Port (the Isle of Man Boat Train). This was done by using the 08:13 commuter service from Preston to Manchester with a change at Manchester Oxford Road into the Transpennine Express service from Liverpool to Scarborough. Slow running in the Dewsbury area meant that this train was 8 mins late into Leeds allowing only 1 min to get from platform 15b to platform 11b – only made possible by the encouragement of Daisy Chapman-Chamberlain, one of CRL’s Education Officers, who accompanied Simon of this leg of the journey. Simon made the train and threw himself on just as the doors were about to close!

Once Simon caught his breath he was able to sit back and relax for the journey along the third of the lines, The  Bentham Line (Leeds to Lancaster, Morecambe & Heysham Port) and longest leg of the day at 78.25 miles.

Members of the Leeds, Lancaster & Morecambe CRP (LLMCRP) and the Lancaster & Skipton Rail User Group (LASRUG) joined Simon for parts of this journey including Rod Tickner, David Alder and Catherine Huddleston who all travelled through to Heysham Port. 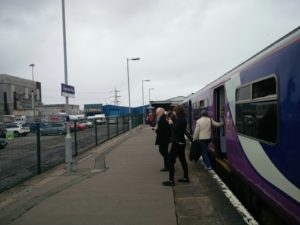 Next was a quick dash down the West Coast Main Line, courtesy of Virgin Trains from Lancaster to Wigan North Western. Simon then crossed over to Wigan Wallgate and boxed off number four of seven the Wigan to Kirkby line. 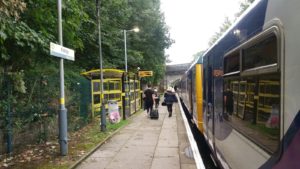 It was then back to Wigan to wait for the next train to Southport , with time to admire the handy work of The Wigan Wallflowers, the Friends of Stations Group. 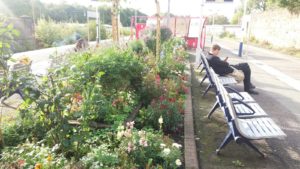 And so to line number five Wigan to Southport and then back tracking to Burscough to catch the train from Burscough Junction to Ormskirk. Ormskirk to Preston was line number six and this was 346 miles travelled in 13hrs 29mins. 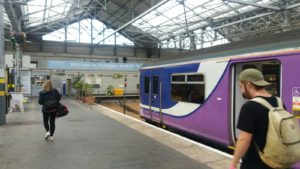 This was in theory the end of the challenge but there was the final three quarters of a mile from Gannow Junction to Burnley Manchester Road station to cover. Burnley Manchester Road station is included in the Department of Transport’s community rail designation for the East Lancashire CRP and need to be ticked off to complete the day. It was back from Clitheroe to Blackburn to catch the final Todmorden Curve service arriving in Burnley at 22:54.

The final tally was 433 miles travelled in 17hrs 50mins. The itinerary for the day can be downloaded here https://www.communityraillancashire.co.uk/wp-content/uploads/2017/09/7-Line-Challenge-actual.pdf and for those traction geeks out there a record of the units travelled on is included.

In conclusion: Yes it can be done, but it is a very long day and the connection at Leeds is very, very tight even if the trains are on time. If you asked Simon if he would do this, or something similar, again he would almost certainly say yes – railways are in his blood and he loves a challenge!

Simon was raising money for The Alzheimer’s Society and to date the total stands at £635.00. If would like to contribute donations will be accepted up to 21st December 2017 and can be done online at https://mydonate.bt.com/fundraisers/simonclarke1