30th May, 1994 saw the restoration of a regular train service between Blackburn and Clitheroe calling at new or refurbished stations at Ramsgreave & Wilpshire, Langho and Whalley.

To mark the occasion Community Rail Lancashire held a reception in the Ribble Valley Council Chamber on Thursday 6th June which brought together the people and organisations involved in the restoration of the service back in 1994 and have overseen its subsequent development. 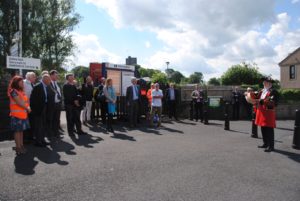 “Today is a celebration of 25 years hard work in developing the Clitheroe Line which plays such an important part in the lives of the many people who depend on it. Many people and organisations have been involved over the years. I was part of the campaign that ultimately saved both the Settle Carlisle & Blackburn to Hellifield lines, and as a former officer of Lancashire County Council I was part of the team that brought back the trains to Clitheroe.”

Richard went on to say; “The key to the continuing success of the line is the partnership between the local community, the rail user group, station volunteers, local authorities, the railway industry and the Clitheroe Line CRP pooling resources to further develop the stations and services on the line. I look forward to the next 25 years when I hope that through our combined efforts we will see more frequent services with trains and stations fit for the 21st century.” 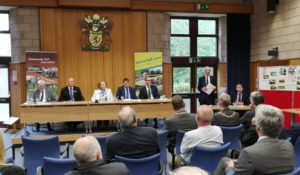 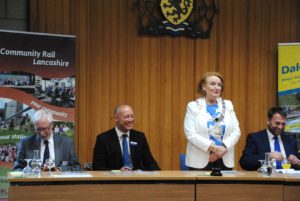 “It’s fantastic to be able to celebrate 25 years of continuous rail services between Blackburn and Clitheroe. The return of these services, in 1994, provided a lifeline for local communities and Northern is justifiably proud to be part of that community and the anniversary celebrations.

We echo the commitment of our partners and rail user groups in working to make this line, its stations and services, the best they can be and are working hard to improve journey opportunities, our stations and our trains.

In just a few weeks the first of our brand new trains will enter service and we will start to retire our Pacers; the refurbishment of the rest of our trains is also gathering pace, ensuring that all customers across our network, whether their route has new trains or not, will soon travel on carriages fit for the 21st Century.”

“I was absolutely delighted to be part of these celebrations and announce that our officers are now working with Transport for the North and the Rail North Partnership to develop the business case for two trains to run hourly along the Clitheroe to Blackburn line.

“We’ve also been involved in several successful projects, which include the Sunday Ribble Valley Rambler, linking Blackpool and Preston to Hellifield with connections to/from services on the Settle Carlisle line, school engagement projects and marketing initiatives such as the ‘Gateway to the Ribble Valley’ campaign.

“The council is also part of the ‘Connect East Lancashire’ project with Blackburn with Darwen Borough Council where schemes to improve the stations at Clitheroe, and Ramsgreave and Wilpshire, are being looked at.”

“As a Council we were a part of bringing the railways back to Ribble Valley and it’s a real pleasure to celebrate that achievement. Our communities seek better and more reliable connections to the wider world and our Economic Partnership has highlighted the importance of good rail links for a prosperous future. We will continue to work with partners to ensure transport is high on the agenda and are particularly keen to see a shift to half hourly services to Manchester and direct connections to Preston and the West Coast mainline.” 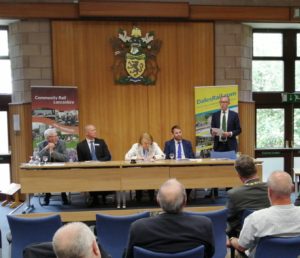 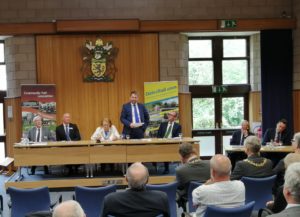 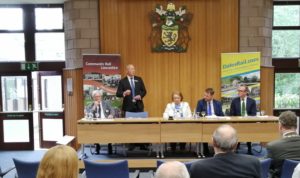 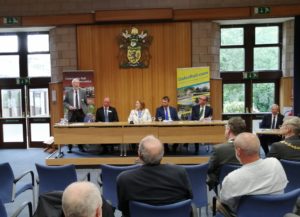 “Transport for the North is delighted to be able to help celebrate the success of the Ribble Valley line and the service which has connected the town of Clitheroe to Manchester over the last 25 years. Good connectivity across the North is vital if we are to thrive as region and grow our economy. The campaigning for the reopening of the line from Blackburn, and the championing of the service for a quarter of century, showcases the real benefit of a community working together with local authorities, elected members and the rail industry to achieve a goal that supports social, economic and environmental objectives. I want to congratulate everyone involved in this project. It’s a great example for others to follow.” 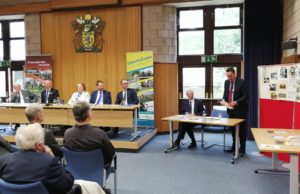