Manchester Victoria – is the end of the Stickleback Line, but some services do continue as far as Wigan Wallgate allowing for through travel to Salford Central and Salford Crescent.

The station is a combined mainline railway station and Metrolink tram stop. Situated to the north of the city centre on Hunts Bank, close to Manchester Cathedral, it is adjoined to Manchester Arena which was constructed on part of the former station site in the 1990s. Opened in 1844, Victoria is Manchester’s third busiest railway station after Piccadilly and Oxford Road and the second busiest station managed by Northern after Oxford Road.

Victoria station is in an area of Manchester called the Northern Quarter, defined and named in the 1990s as part of the regeneration and gentrification of Manchester.

Manchester Arena – opened in 1995 the arena is Manchester’s biggest concert venue and is situated above the station. The arena has the highest seating capacity of any indoor venue in the United Kingdom, and second largest in the European Union with a capacity of 21,000 and is one of the world’s busiest indoor arenas, hosting music and sporting events such as boxing and swimming.

Manchester Cathedral ­- formally the Cathedral and Collegiate Church of St Mary, St Denys and St George, is the mother church of the Anglican Diocese of Manchester, seat of the Bishop of Manchester and the city’s parish church. It is on Victoria Street in Manchester city centre. 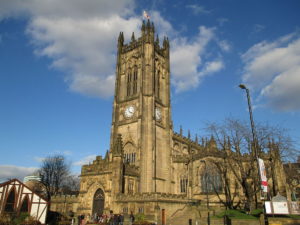 The main body of the cathedral is in the Perpendicular Gothic style. James Stanley (warden 1485–1506) was responsible for commissioning the late-medieval wooden furnishings, including the pulpitum, choir stalls and the nave roof supported by angels with gilded instruments. The medieval church was extensively refaced, restored and extended in the Victorian period, and again following bomb damage in the 20th century. The cathedral is one of fifteen Grade I listed buildings in Manchester.

Chetham’s Library – immediately outside Victoria station (2 minute walk) the library is the oldest free public reference library in the English speaking world. Chetham’s Hospital, which contains both the library and Chetham’s School of Music, was established in 1653 for the education of “the sons of honest, industrious and painful parents”, and a library for the use of scholars. The library has been in continuous use since 1653. It operates as an independent charity, open to readers and visitors free of charge but you must book at least one day in advance.

Afflecks – formerly Affeleck’s Palace is an emporium of eclecticism in Manchester’s Northern Quarter. Afflecks is open 7 days a week and is just a 5 minute walk from the station.

Northern Quarter – is an area of Manchester city centre, between Piccadilly station, Victoria station and Ancoats, centred on Oldham Street, just off Piccadilly Gardens. It was defined and named in the 1990s as part of the regeneration and gentrification of Manchester. A centre of alternative and bohemian culture, the area includes a plethora of bars, pubs, places to eat and a host of independent shops.

The Printworks – an entertainment venue in the revamped Withy Grove site of the business premises of the 19th century newspaper proprietor Edward Hulton.

Manchester Town Hall – is a Victorian, Neo-gothic municipal building in Manchester, England. It is the ceremonial headquarters of Manchester City Council and houses a number of local government departments. The building faces Albert Square to the north, featuring the Albert Memorial and St Peter’s Square to the south, home to The Cenotaph.

Beetham Tower – completed in 2006 this is currently the tallest building in Manchester and outside of London. The Cloud 23 bar offers incredible views across Manchester and on a clear day as far as Blackpool, Snowdonia and the Pennines.

Lancaster House – in the Edwardian Baroque style it was built between 1905 & 1910 using red brick and orange terracotta. Originally a packing and shipping warehouse the building is now Grade 2* listed.

One Angel Square – close to Victoria station this landmark building is the head office of the Co-operative Group. The building was awarded an ‘outstanding’ BREEAM rating and is one of the most sustainable large buildings in Europe.