Historically a part of Lancashire, Castleton’s early history is marked by its status as a township within the ancient parish of Rochdale. Prior to merging with the County Borough of Rochdale in 1900, Castleton experienced rapid growth during the 19th century as a mill town in its own right, facilitated for the most part by the construction of the Rochdale Canal which is routed through the area. Castleton’s growth was significant; so much so, that for a time it was almost the same size of nearby Rochdale.

St. Martin’s Church – a 5 minute walk from the station brings you to this fine Victorian church. Completed in 1863 the church closed in 1991 but was fully refurbished in 2002/2003. 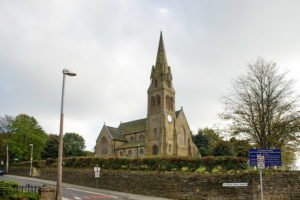