Burnley Manchester Road is one of three stations in the market town of Burnley. The town is partially surrounded by countryside and has a reputation of excellence for the manufacturing and aerospace industries. 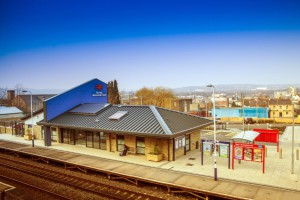 The Leeds Liverpool canal runs through the town and it was this that helped Burnley become one of the North West’s biggest producers of cotton. The Weavers Triangle on the canal has been the site of a massive renovation project over the last few years.

Weavers Triangle – start at the Visitor Centre (5 minute walk from the station) to discover the background to this charitable organisation that looks after Burnley’s cotton and canal heritage.

Leeds Liverpool Canal – accessed via the Weavers Triangle this section of canal has a notable feature the ‘Straight Mile’. Regarded as one of the original seven wonders of the British waterways it was constructed between 1796 & 1801 before the invention of the steam shovel.

Burnley Mechanics – it is just a 10 minute walk to this Grade 2* listed theatre was built in 1855 and was a former Mechanics Institute. It now hosts musical and theatrical performances in its state of the art performance venues.

Towneley Hall – a 35 minute walk or by regular bus from the town centre bus station Towneley is a historic hall dating from the 14th Century and houses an art gallery, museum and is set in 400 acres of parkland.

The Singing Ringing Tree – one of Lancashire’s four panopticons is a unique musical sculpture which overlooks Burnley from its position high above the town on Crown Point.