What is Community Rail

What is a Community Rail Partnership?

In November 2004 Alistair Darling, Secretary of State for Transport unveiled the Community Rail Development Strategy, which was produced by the Strategic Rail Authority and provided a framework for developing, and securing the future of, local and rural railways.

The strategy, reviewed in March 2007 and again in November 2018, the strategy as its foundation supports community rail organisations themselves to flourish as inclusive, independent and sustainable groups so they are well placed to deliver the strategy’s key pillars:

+  Providing a voice for the community;
+  Promoting sustainable, healthy and accessible travel;
+  Bringing communities together and supporting diversity and inclusion; and
+  Supporting social and economic development.

Community rail lines and services are part of the commercial rail network, with services operated by the train operating companies and infrastructure owned and maintained by Network Rail. Although many provide a tourism service they are largely distinct from heritage and private railways that have been reopened as tourist attractions.

There are over 60 community rail partnerships throughout the country and these partnerships are part of a federation that is overseen by the Association of Community Rail Partnerships (ACoRP), an organisation that is sponsored by the Department for Transport.

A community rail partnership is just what is says – a partnership between Network Rail, the train operating company, local council, other community organisations such as rail user groups and other stakeholders and supported by ACoRP and the DfT, working to improve their community rail lines, stations and services. There is also a host of volunteers (around 3,200) who contribute around 250,000 hours of work each year at their local station and community bringing in about £3.4 million of extra value to the rail industry.

As part of the 2004 Community Rail Development Strategy, community rail lines and services could be ‘designated’ by the Secretary of State. Designation was created as a system to enable community rail lines to be managed, marketed and supported, with the aim of identifying to reduce red tape and simplify processes relating to community rail lines. Although designation has not in practice been used to deliver all of the aims originally intended, it has allowed many community rail partnerships to access additional funding to kick start innovative projects, largely through the Designated Community Rail Development Fund. It has also on some occasions been the stimulus to the rail industry adopting more pragmatic solutions to address local needs. Most importantly, it has bestowed the status of being formally recognised by Government, which has been welcomed by community rail partnerships.

Consultation with the rail industry and beyond during the development of the new strategy showed a desire for designation in its current form to be replaced with something which focused more on being a mark of quality for community rail partnerships. As such, we will develop a system of accreditation for community rail.

Accreditation builds on the legacy of designation. It will:

+  Act as a trusted mark of quality for community rail groups.
+  Be developed as a brand that is recognised both within the rail industry and beyond, acting as a tool to assist community rail groups when engaging with new
stakeholders both in local government and private industry. This in turn will help community rail groups to collaborate with new partners and diversify their funding bases.
+  Assist in creating opportunities to further develop community rail’s impact and to influence unregulated fares.

This process will apply to community rail partnerships in England and Wales.

Currently there are five community rail partnerships in Lancashire:

Community Rail Lancashire and the five CRPs have all successfully applied for, and been awarded accreditation. 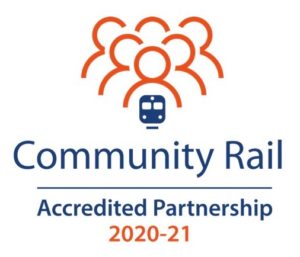